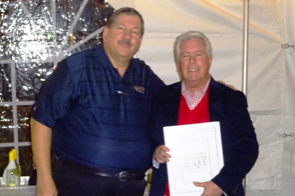 Bob Black, President and CEO of Juki Automation Systems, said, “Dave Trail and his crew at Horizon Sales are proven winners. We thank them for another great result this year.”

“We are quite proud and humbled to be chosen as the Juki Representative of the Year again. Our team has been able to prove once again that the Juki product line meets the needs of the Midwest marketplace when it comes to high reliability with lowest cost of ownership in the SMT Industry. We attribute a large part of our success this year to the growing interest in Juki’s entire product offering that extends beyond just pick-and-place machines. In fact, more than 36 percent of the sales dollars that customers spent with us this year was for Juki printers, ovens and inventory storage management systems, again proving that Juki’s forward push into full line solutions is ideally suited to the needs of the Midwestern marketplace.”

Horizon Industrial Systems, Inc. (DBA Horizon Sales) was incorporated in January 1992. Horizon Sales takes great pride in its ability to maintain a strong customer base as a well as the stability and longevity of its core product lines. Horizon manages and sells to the mid-western states of: Michigan, Ohio, Indiana, Kentucky and Western Pennsylvania, and recently added Illinois, Eastern Iowa and Wisconsin.

Horizon Sales has represented Juki’s full line of automated assembly products and systems throughout Ohio, Michigan, Indiana and Kentucky since 1993. The firm also now represents Chicago, most of Illinois, Southern Wisconsin and Eastern Iowa. For more information about Horizon Sale’s products and services, contact Dave Trail, Principal, at 800-234-8688 or on the web at www.horizonsales.com.